The CARE Wrist Bandage is an ideal compression aid for mild complaints around the wrist. This wrist bandage provides compression, relieves pain and reduces fluid around the joint. Ideal for complaints such as rheumatism, arthrosis and fibromyalgia!

This neoprene wrist brace fits very well around your arm, can get completely wet, is easy to put on with one hand and has an extra strap at the height of the wrist for extra stability. Nowhere cheaper!

The Teyder Neoprene Thumb Brace and Wrist Splint in One is a stable wrist splint with thumb that fits seamlessly around your arm. The wrist splint can get wet, has 2 removable ribs and has an extra strap to stabilize the wrist as desired. Temporarily pric

The Ligaflex Manu Thumb Brace / Wrist Splint is a thumb and wrist brace in one and provides maximum support and protection. The wrist brace is ideal for instability, tendon infections, m. Quervain, ski thumb or with a carpal tunnel syndrome.

RSI, now called CANS is a collective term for muscle complaints in the arm, neck, wrist or shoulder. RSI is an injury that comes from repeatable movements. A known for the wrist is the so-called mouse arm.

What is a mouse arm?

By maintaining or repeating one and the same movement, the wrist can start to ache. This is a condition where repetition is central. At RSI the condition will sneak into it. The complaints in the fingers or wrist will disappear after performing the load. However, the symptoms will persist over time and loss of strength will occur in combination with irritation, swelling and pain.

Causes RSI in the wrist

The most common cause of RSI or a mouse arm occurs by performing the same repetitive movement for a longer time. For example, insufficient break is taken and poor working posture is the cause of a mouse arm.

A mouse arm is best to prevent than to cure. If, unfortunately, the symptoms persist for a long time and do not decrease, then it may just be that a brace provides the ideal support and possibly reduces the symptoms. ProBrace recommends the following braces, the braces are almost identical.

In addition, the Wrist Bandagze from Zamst is also advisable. The bandage is just a bit easier to put on and provides some more freedom of movement compared to the braces mentioned above. 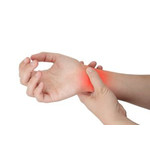