Rheumatism in your hand

What is rheumatism and is a wrist or hand brace effective?

Rheumatism, often referred to as 'Rheumatoid Arthritis', is an autoimmune disease. To protect the body against diseases, the body makes antibodies. In an autoimmune disease, it is the case that the antibodies, which the body produces itself, start to defend against the body. This is due to the fact that the tissue within the hand is perceived as “foreign”. This will cause swelling and inflammation that are painful and sensitive; rheumatism. A wrist brace is very effective for people with osteoarthritis in the hands and wrists. 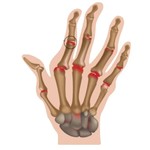 This elastic thumb bandage is the ideal aid for osteoarthritis and rheumatism on the wrist and / or thumb. The elastic fabric forms perfectly around your hand. You will experience immediate relief!

Support for the wrist joint and carpal bones without rigid ribs. The unique properties of the Teyder NEOthermik material ensure a protective and pain-relieving effect!

The CARE Wrist Bandage is an ideal compression aid for mild complaints around the wrist. This wrist bandage provides compression, relieves pain and reduces fluid around the joint. Ideal for complaints such as rheumatism, arthrosis and fibromyalgia!

This neoprene wrist brace fits very well around your arm, can get completely wet, is easy to put on with one hand and has an extra strap at the wrist for extra stability. Nowhere cheaper!

The FormFit Wrist Brace from Ossur has the best price-quality ratio of the moment! Very affordable, comfortable and durable.

Finger bandage for support during everyday activities or sports. Easy to apply and very skin-friendly and cheap compared to taping. Can also be used for the toes!

The GO Medical rheumatism gloves support your hands, provide compression, improve circulation and provide you with warmth when your hands hurt. Ideal for rheumatism, arthritis or arthrosis!

The Teyder finger splint is compact and easy to use! Available in different sizes and due to the aluminum the finger splint fits every finger.

How does Rheumatism develop?

Rheumatism develops gradually. In the early stages, nothing will be noticed yet about the joints. At a later stage, fingers may feel sensitive and stiff. Many studies are underway to discover the exact cause of rheumatism. Until now it can be concluded that rheumatism can occur at all different ages and that the dysfunction of the autoimmune system takes place. The autoimmune system can become disrupted by bacterial infections, stress or excessive stress. What we do know is that rheumatism is more common in women than men .

Symptoms of the rheumatism fingers and hands

Treating rheumatism with a hand brace or wrist brace?

With rheumatism it is important that advice is sought from a doctor or specialist. He will prescribe medicines for you. You will also be referred to a medical specialist for movement exercises to reduce the stiff feeling.

A hand brace can provide extra support for everyday actions. ProBrace can advise the following thumb braces for your hand:

Below are two similar wrist braces :