The Boxia is a light and dynamic bandage for people with a drop foot. The ergonomic design and the optional accessories make the Boxia one of the most comfortable folding foot bandages on the market.

The Foot-Up is a lightweight ankle-foot orthosis that provides dynamic lift and support for your drop foot (dropfoot) or similar complaints in which the foot lifter functions less effectively.

The Boxia Plus from Orliman is a One-Hand-On dropfoot brace that can be pulled on with one hand. Bilateral, suitable for right and left! Nowhere cheaper to obtain!

These hooks are specially developed for the Boxia Klapvoet Bandage. These hooks are worn in the lace holes of your shoe. Also ideal for loafers, the solution with a drop foot.

A folding foot occurs because the body is unable to control the right muscles. The muscles are controlled by nerves. The folding foot owes its name to the "blow" that is heard when the person puts his foot on the ground, after lifting his foot.

What is a drop?

With a folding foot you are no longer able to move the foot upwards. The folding foot owes its name to the fact that people can not lift the foot properly during walking. The foot is lifted and will land flat on the ground with a "slap". Hence the term hit foot. A folding foot is created by less well functioning nerves.

A folding foot occurs because the body is unable to control the right muscles. The muscles are controlled by nerves. Often no connection can be made with the muscles because the nerve can be affected. If the nerve is affected, the foot will no longer rise.

A drop foot can be the cause of various factors. The main and main factor of a drop foot are the control of the nerves. Often a foot is formed due to damage to the nerve in the lower leg (peroneal nerve). This often happens because of a trauma, long-term and often sitting cross-legged or squatting for a long time (while working).
When the nerve gets stifled or narrowed (stenosis), the signals can not be pushed to the foot and can therefore also form a foot. In addition, it is possible that the nerve is damaged during an operation.

Treatment of the foot

The best way to treat a foot is to remove the direct pressure on the nerve. Adjusting body posture and changing habits is often enough to deal better with a drop-foot. There are also various exercises to train the control / sensibility over ankle / foot. Be informed by a physiotherapist from ProBrace . Usually the folding foot restores within two to three months, but in some cases the folding foot will never disappear. In case of severe weakness or complete paralysis, a combination of physiotherapy with targeted training in combination with a brace / bandage is the solution.

A folding foot splint, brace, bandage or EVO   is a tool that ensures that your foot does not 'hang' during the swing phase of the walking pattern or folds down when the heel bone makes contact with the ground (landing phase heel bone). Folding foot braces and bandages are only used in people with weakened foot lifts and a mild foot, the EVOs (only foot orthosis), are more used in case of a heavy foot, heavier injuries and combinations with spasticity. There are different variants available; from very simple to advanced: 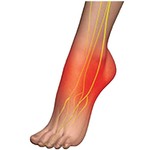